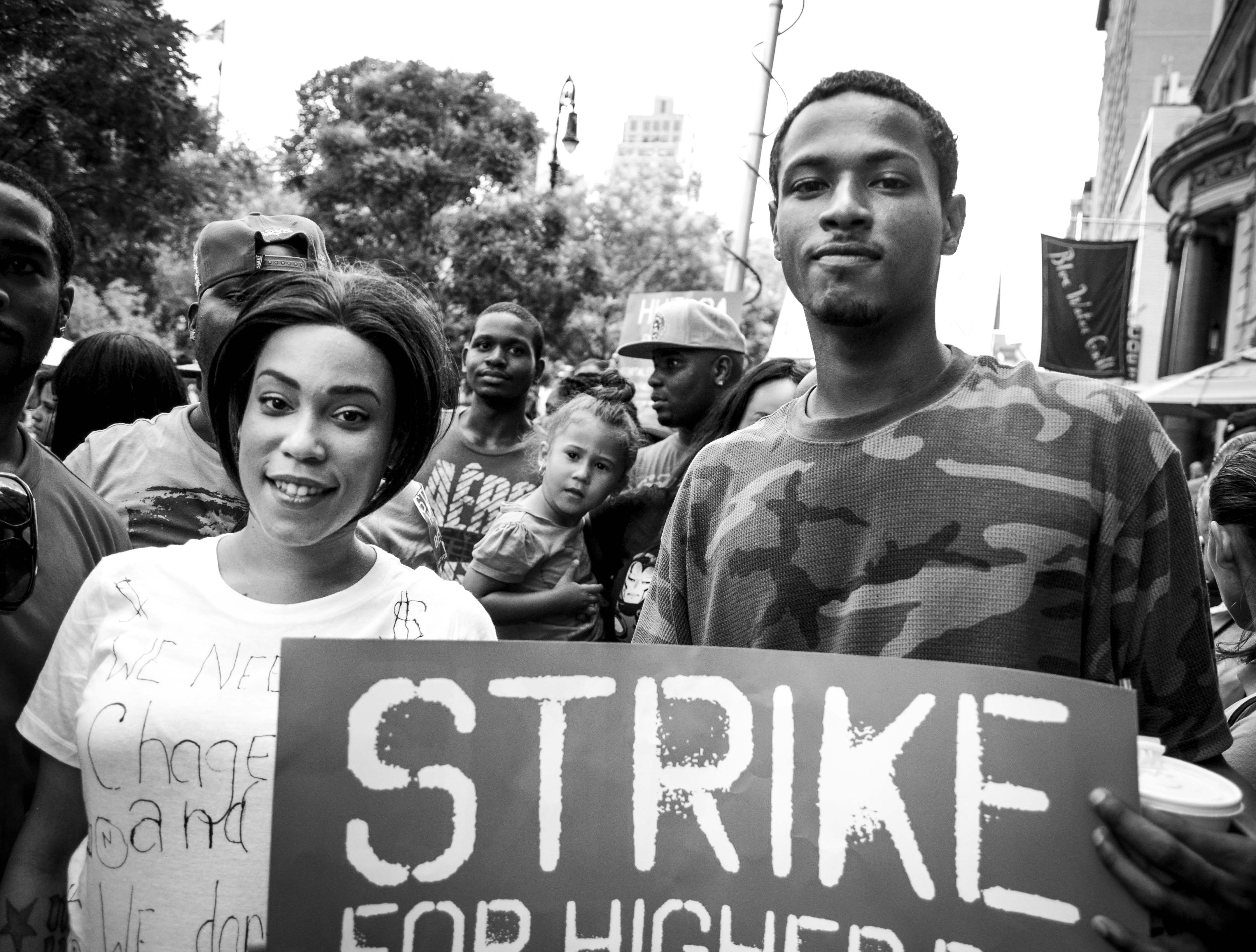 The restaurant industry is one of the biggest opponents of labor reform and economic sustainability for wage workers. Notorious examples include Papa John's CEO stating that giving employees health benefits will raise the price of pizza despite giving away pizzas during Super Bowl season, and major fast food chain heads making hand-over-fist while paying those doing the most work a dismal minimum wage. Minimum wage for waitstaff has remained the same since 1991, making servers reliant on tips customers don't always give to cover living expenses. By the way, gratuity is taxed whether or not you give the full 15-20%.

Sam Pizzigatti of Inequality.org explores the food industry in this article shared on Common Dreams. He discusses how industry giants have prevented wage increases and benefits for the very people who keep the restaurant industry running.

What can we do to encourage a change in these practices? Are there any restaurants that do pay their workers a living wage?  Please share in the comments, I'm sure other readers would love to bring their business to places that care about their workers.

A good many Americans now know the high-finance games that JPMorgan Chase and other big banks like to play — at our expense. And big oil giants like ExxonMobil have been outraging Americans for years.

But plenty of other corporate giants that inflate our inequality have been flying under the radar screen. Who, for instance, has ever heard of Darden? Or Yum! Brands?

(read more after the flip)

These little-known outfits just happen to rate as two of the biggest corporate behemoths in the restaurant industry. They’ve been squeezing workers — and soaking taxpayers — as relentlessly as any enterprises in America. Yet they barely have any national profile at all.

That may be about to change.

Last week, on the eve of the National Restaurant Association annual meeting, two top think tanks — the Institute for Policy Studies in Washington and Demos in New York— released new studies that detail how America’s food-service giants are growing the gap between the nation’s rich and everyone else.

This week protesting restaurant workers will be taking that message to the streets. Many of these workers are currently laboring at the $2.13 hourly federal minimum wage for tipped workers, a base that hasn’t budged since 1991.

Restaurant workers nationwide take home so little pay, notes the new Institute for Policy Studies Restaurant Industry Pay study, that over half of them have to depend on food stamps and other taxpayer-subsidized safety net programs.

But the subsidies that taxpayers are laying out for the food-service industry actually go far beyond these federal safety net outlays. The tax dollars of average Americans are also subsidizing the sky-high pay that goes to the restaurant industry’s top executives.

Under current tax law, corporations can essentially deduct off their taxes whatever many millions they pour into top executive pockets, so long as they define those millions as “pay for performance.”

In 2012 and 2013, this loophole saved the restaurant industry’s 20 top corporations — and cost the federal treasury — $232 million, enough, notes the Institute for Policy Studies, “to cover the cost of food stamps for more than 145,000 households for a year.”

Other top food-service industry executive players actually pulled in considerably higher sums. The industry’s king of the hill, Starbucks CEO Howard Schultz, cashed in an amazing $230 million worth of stock options in 2012 and 2013, a windfall totally claimed as “performance-based.”

Overall, fast-food industry CEOs averaged $23.8 million in 2013, more than quadruple, notes the new restaurant industry report from Demos, what the industry’s top execs averaged in 2000. Average wages for fast-food workers, by contrast, have inched up a miniscule 0.3 percent since then.

Restaurant industry movers and shakers have essentially hit upon the perfect formula for executive success: Pay your workers close to as little as the law allows — and make sure that no one changes the law. The National Restaurant Association has emerged as the leading corporate lobby powerhouse against raising the federal minimum wage.

The NRA’s lobbying lets image-conscious food-service industry CEOs have their cake and eat it, too. Case in point: Nigel Travis, the top exec at Dunkin’ Brands, the corporate front for Dunkin’ Donuts and Baskin Robbins. Travis told an interviewer recently that he believed “the minimum wage will go up.” Added the exec: “So there’s no point fighting that.”

“Maybe there’s no point for Travis,” quips the Institute for Policy Studies study co-author Sarah Anderson. “He’s got the NRA to do that job.”

Pushing back this week — against the NRA — will be activists from the Restaurant Opportunities Centers United, the National Domestic Workers Alliance, and National People’s Action. They’ll be staging a national march to “kick corporate cash out of Congress.”

This growing worker challenge to the restaurant industry status quo has industry powerhouses more than a little bit spooked. In its 2014 Securities and Exchange Commission filings, McDonald’s even cites as one of its new “risk” factors the “increasing focus on workplace practices and conditions” that “may intensify with increasing public focus of matters of income inequality.”

The suits at McDonald’s can’t seem to figure out how to ease this risk. Last week’s think tank reports on the restaurant industry suggest a simple solution: Just stop manufacturing more inequality.