To Check Power of Greedy Bosses, Workers Need to Bargain in New Ways 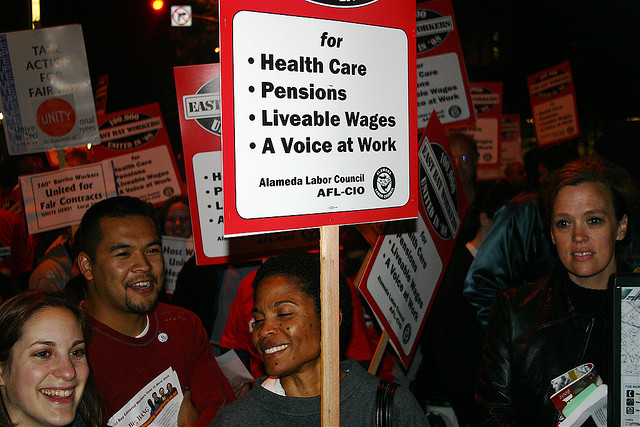 Exploitation is the name of the game. We don't like to use that term, but the truth is that the labor movement is a long-time struggle against exploitation by the powerful.  We don't like to associate the term exploitation with our society. When we think exploitation we think of the loss of labor rights in other countries, sweat shops, or even trafficked labor on our own soil. We never think that we, American citizens, can be exploited.

Yet that's what it is. Exploitation is the single parent working 2-3 minimum wage jobs who is still unable to afford rent, bills, or groceries. Exploitation is paying health aides and caretakers minimum wage to watch over our most physically vulnerable members of society. Exploitation is expecting more hours out of a worker while cutting benefits packages, even more so when a worker is expected to work off the clock unpaid to make sure they don't have the qualifying hours on record to earn benefits. The 1% exploits labor.

What can be done? The same thing we've always done, collectively bargain for our needs. Sarita Gupta's article in "The American Prospect" stresses the importance of laborers, and even college athletes, to band together and demand better treatment and compensation. It may take a different form from the bargaining of the early 20th century labor movement, but that's the nature of evolution.

We ask that you stand with us as we fight to end labor exploitation here in Rochester. That you join us in supporting the Fight For $15 and hour wages and unions for food service and care workers. We ask for support as we call out Action for a Better Community as a hypocritical organization. If they truly cared about lifting our neighbors out of poverty, they would not be contributing to the problem by paying their daycare workers poverty wages. If you know of any other workers who need our support, let us know.

Work looks a lot different today than it did 100, 50 or even 10 years ago: it’s faster, it’s automated, and it’s complex. We used to pin these shifts on globalization; now we’re tying everything to the rise of an on-demand sharing economy. And while it may seem like progress in terms of how quickly and cheaply we can get things, we can’t forget that it’s happening at the expense of regular people and their ability to work full time and earn a decent living.

That’s because, for far too long, greedy CEOs have held all of the power, giving those of us doing the work very little room to make our voices heard. Corporate interests have been on a decades-long bender to depress wages, benefits and job standards, trapping you and me and other everyday people in an economy that’s completely out of balance for the benefit of a wealthy few. In fact, half of the world’s wealth is now controlled by the top 1 percent of the super rich.

The rest of us are just trying to keep up. But despite all of the concentrated wealth at the top, the so-called trickle down just isn’t making its way into our pockets. We’re not seeing the family-supporting jobs that offer enough of us the freedom to live a dignified life and provide for our loved ones. Mothers find themselves hustling between three jobs and still having to put back items they can’t afford at the grocery store. Fathers can’t help save for their children’s education because they’re drowning in their own student debt. Across the board, most bosses are looking out for their own bottom line, not ours.

At the heart of this struggle is the reality that we’re no longer working in traditional, family-sustaining careers. As the way we work continues to change in this country, isn’t it time that the rules and standards governing our workplaces do too?

If we’re going to rewrite those rules, we need to give everyone a seat at the table. When the powerful few get to decide which wages, benefits and workplace standards the rest of us deserve, the economic picture goes wildly off-kilter. But what if we all had a stronger voice at work? What if we all had the ability to share our ideas, negotiate on behalf of the collective good, and stand up for issues that really matter? Isn’t that voice a critical piece of helping us restore the good, family-supporting jobs that seem to keep disappearing?

We all want to be able to bargain for a better deal, and we all want the voice we have at home, at school, at our places of worship—and to extend that voice to our workplaces as well. Sure, we mean collective bargaining through the traditional union lens, but we also mean it in a much broader sense. There are all kinds of legislative, policy, rulemaking reforms and direct employer and industry interventions we can advance that put more money in workers’ pockets, improve standards and conditions, and directly confront the corporate actors who have long rigged the game to benefit themselves at our expense.

In the last few years alone, there are countless examples of people who fought for a voice on the job, won, and were able to negotiate a better, fairer deal. Take home-care workers in Missouri, many of who were supplementing their family’s meals with handouts from local food pantries in order to feed their families. They came together and formed a union back in 2008, and despite increased opposition from Governor Jay Nixon, they bargained for a raise to $10.10, and won a strong new contract late last year. Home-care work is a perfect example of a field where unions have not been the norm, but where the mothers and grandmothers who made a living caring for others decided to use their voices to demand the ability to make enough money to care for themselves too.

And then there are college athletes, who for years have been caught in a senseless “student-athlete” charade that denied them any say in their own lives and schedules and allowed coaches and administrators to take advantage of their time, their talent and their ability to actually get an education. Last year, football players at Northwestern University decided it was time to speak up. There’s no formal union yet, but the process alone has paved the way for college players to demand and win real improvements, including scholarships that cover a broader range of expenses as well as travel opportunities for their families to watch them play.

We’ve also seen it play out in reverse. When bargaining power is diminished and people’s voices are shut out of the workplace, job quality and job standards suffer. Look at adjunct professors at colleges and universities. Being a professor was once considered a stable, family-supporting career, but now these workers put in full-time hours but still struggle to make ends meet.

It's not just worker in low-wage industries working at the mercy of self-interested bosses. Remember the wage collusion case in Silicon Valley last year? Tech employees alleged that an agreement between companies not to poach each other’s workforce resulted in depressed and lost wages for workers overall, because they were prevented from changing jobs and advancing their own salaries. In that case, employees had to go to court to get their voices heard—but what if they’d been able to negotiate for a level of basic financial transparency from their employer that would have prevented that deal from being made in the first place?

Last week’s union density numbers suggest that the percentage of the workforce whose members are able to bargain in the strictly union-contract sense may not be on the rise. But the numbers don’t tell the full story. Because we’re still seeing people stand up and exercise their collective voices at work, and we’re seeing the power they have to make real changes when they do that. We need to protect and expand that bargaining power no matter what form or shape it takes.

A century ago, we were fighting for overtime laws and workplace safety standards. Today, the battles look a little different, but they’re no less important. If we’re getting up and going to work every day and still living on the brink—still wondering when we can squeeze another shift in or whether or not we can take a day off to care for a sick child—then we have to spend some serious time thinking of better ways to make sure working in this country actually provides people with a pathway to a better life.