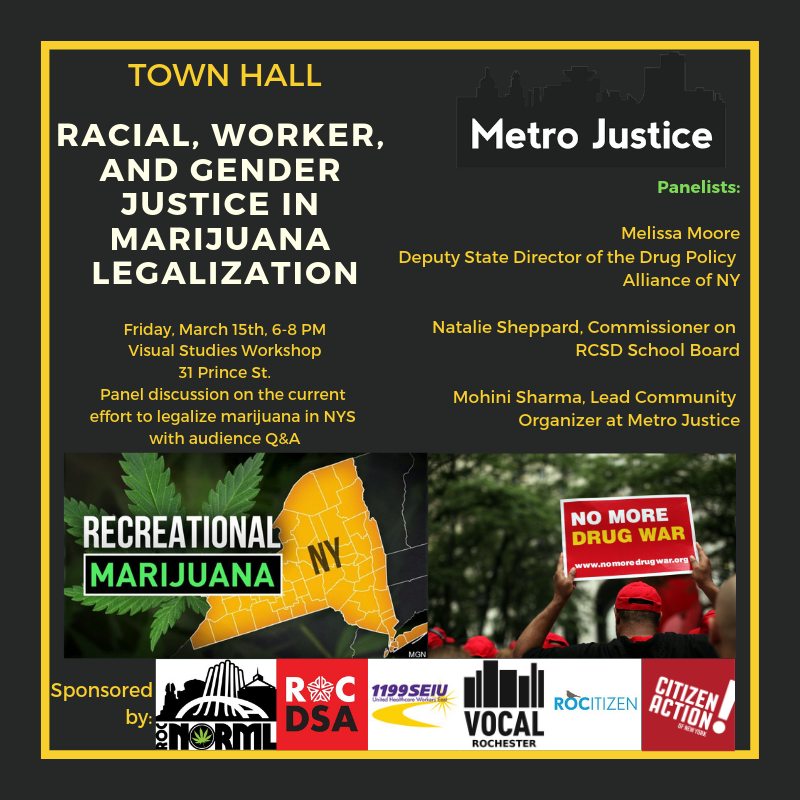 Join us on Friday, March 15, from 6-8 PM at the Visual Studies Workshop for our “Town Hall: Racial Justice, Worker Justice, and Gender Justice in Marijuana Legalization” panel discussion. This is your chance to ask questions, learn about, and take action on marijuana legalization in New York State. Our panel will feature representatives from various parts of our community that have a stake in how legalization happens in NYS, and can speak to the issue from a variety of relevant perspectives. These include: people that have been criminalized by marijuana and are currently in the illicit industry, our youth, medical experts, community organizers, and policy experts. Stay tuned for announcements that will individually introduce each of our panelists, cosponsors, and local electeds that will be in attendance!

Thanks to the organizing of the Start SMART New York Coalition of which Metro Justice is a member, New York State is closer than ever to completely legalizing marijuana. The illegality of marijuana has been a fundamental part of the War on Drugs, which rather than making our communities “safer”, has instead been a weapon against our communities of color and low-income communities for decades. The legalization of marijuana could be a significant blow to a growing racist and classist mass incarceration and policing crisis. It could redress decades of destruction the War on Drugs wrecked on our Black, Brown, and low-income communities. It could be an example of sensible drug policy that fosters the health, safety, and economic prosperity of our communities. Or, the legalization of marijuana could primarily serve the interests of businesses and suburban consumers.

What will it take for marijuana legalization to create an equitable and diverse marijuana industry for consumers, workers, and businesses in NYS? What has worked and not worked in other states that have lifted their marijuana prohibition? What are the public health implications of legalizing marijuana in New York State? What are the current bills that propose legalizing marijuana in New York State, and what terms do they set for legalization? These are just some of the questions our panelists will be addressing, in addition to questions from you, our audience! Our hope is that this town hall is the beginning of building a unified, grassroots movement in Rochester for drug policies that uplift our communities rather than keep them down. Hope to see you there!