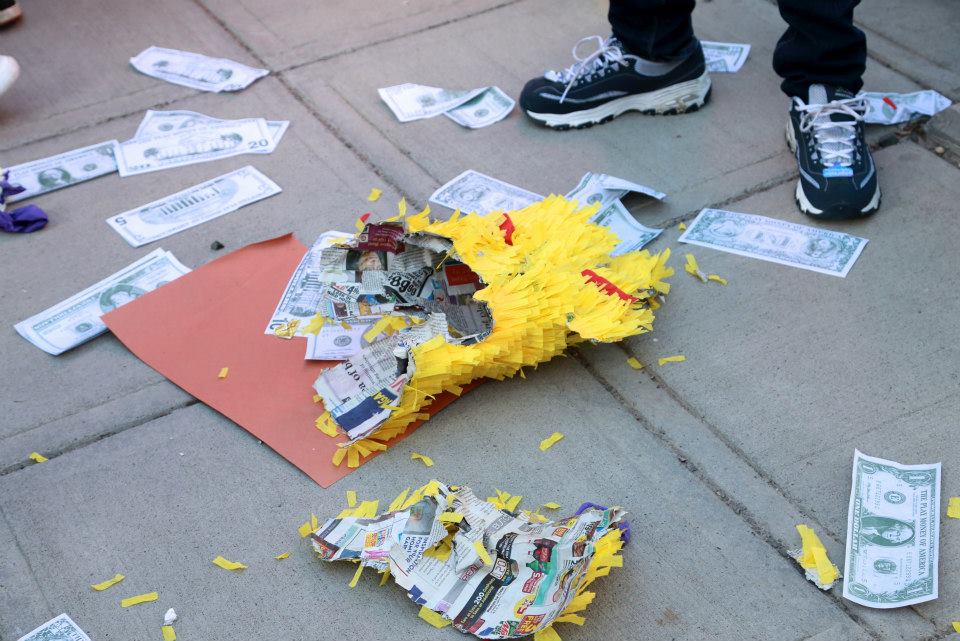 "Just get a better job" is a popular shutdown from opponents of the Fight for $15 movement. Like fast food workers can just walk out of their current jobs, and into something better, problem solved. Unfortunately, reality doesn't work that way. Poverty wages make higher education a challenge, especially with skyrocketing tuition. The job market is highly competitive and "professional" jobs are a different organism in terms of the hiring process than "service" jobs in some cases.

We also have a need for workers in service jobs. For many, fast food is quick and convenient if you're short on time. Big box retail offers a number of items people need for their homes and have grown into these one-stop shops. How many of us go grocery shopping? How many of us fill up at the local gas station and grab a cup of coffee on the way to work? How many of us have a family member who is assisted by a nursing home or home health aide? These jobs play crucial roles in our society. Plus, some people genuinely enjoy working these jobs. Why should we punish these people for jobs that have an impact on everyone's life?

Bottom line is that our society needs to better respect service workers. While we see them as on the bottom of they employment totem pole, without them our lives would be much more challenging. It's time we see service workers as people who should be treated with dignity, and not just people working "jobs fit for teenagers", "dropouts in life" or any other disparaging term that sees their work as less than any other job.

Did you attend last week's Fight for 15 rally? Plan on attending future events?

LOS ANGELES - Thousands participated in a nationwide strike against low and unlivable wages on Wednesday. The rallies, organized by Fight for $15, advocated for a $15 per hour minimum wage. Fast food workers, educators, minimum wage earners of various trades, and supporters of the minimum wage increase banded together to speak out against a major hurdle keeping low-income individuals from leading more prosperous lives.

ATTN: visited the Los Angeles rally, which started right outside a University Park McDonald's location and ended with a march over to the University of Southern California campus a few blocks away. The gathering, which drew more than 1,000 spirited, chanting people and closed down several streets, prompted the aforementioned McDonald's to lock its doors before the official 11 AM rally start time.

(More after the flip!)

Jibri Range, a 22-year-old father who has been working at McDonald's since February 2013, told ATTN: that his wages have made survival in pricey Los Angeles especially challenging.

"It's been all hard work, and I feel like I have to walk on pins and needles just to prove to them that I'm worth [higher wages]," Range told ATTN: at the beginning of the rally. "They say that I'm lazy. We're really going to be heard today, [and] now is the time when they're really going to pay attention to us."

Range has previously spoken out about McDonald's low wages. The South-Central, L.A. location where he works as a maintenance employee has repeatedly refused his requests for higher wages. (ATTN: first met Range at a March protest against McDonald's treatment of on-the-job burns.)

Roger Aragon, a home health care worker who earns minimum wage, echoed a similar sentiment at the rally, arguing this isn't about greedy workers, but rather about being able to make ends meet.

"Let's be honest, the minimum wage has not been able to keep up with the cost of living for a very long time, and it's about time we get this straightened out," Aragon told ATTN:. "It's not about getting paid extra, it's about making sure we get out of poverty."

"College is so expensive, so you can't go to universities without having a higher wage," Teepen told ATTN:. "[Fifteen dollars an hour would] make a huge difference, particularly if you want to pay for college, housing, or health care. I have two children who make minimum wage, one who is trying to support her family and get her master's degree. It's incredible to watch her struggle."

Teepen believes increasing minimum wage would improve overall performance and boost morale in workers, many of whom juggle multiple jobs because they can't get enough hours or high enough pay at any one position.

"You're not then rushing to your second or third job," Teepen told ATTN:. "You'll be putting a little more effort into what you're already doing, and then you'll go to college."

In 1978 working a minimum wage job full time for seven whole weeks was enough to pay for a year of in-state tuition at a university. Today, a student has to work nearly 27 full 40-hour work weeks to make enough money to pay a year's worth of in-state tuition.

Low wages mean more than merely having to budget well. Pastor Cue Jn-Marie of The Church Without Walls in L.A.'s impoverished Skid Row neighborhood came to the rally because it breaks his heart to encounter homeless and extremely low-income people who don't earn enough money to take care of themselves.

"Being that I am from Skid Row, it's really important that our city raises up the economic level of the poor in our community because people are living paycheck to paycheck, and Skid Row is getting worse," Jn-Marie told ATTN:. "These companies make billions of dollars, and we need them to start investing back into their communities they're getting their revenues from."

Not everyone can "get another job"

Though some say minimum wage earners should just "get another job" if they want solid pay and better treatment, it's not so easy for those born into low-income homes. A 2013study from the Pew Charitable Trust found that only 26 percent of those raised in low-income households moved up to middle or upper class brackets.

"Building savings is a tremendous tool for promoting upward mobility but it is largely ignored by policymakers," Justin King, policy director of the Asset Building Program at the New America Foundation, told CNN of the findings. "They have to trade their long-term well-being for short-term assistance."

Franchesca Ramsey of Upworthy points out that there will always be a need for service industry workers as well: 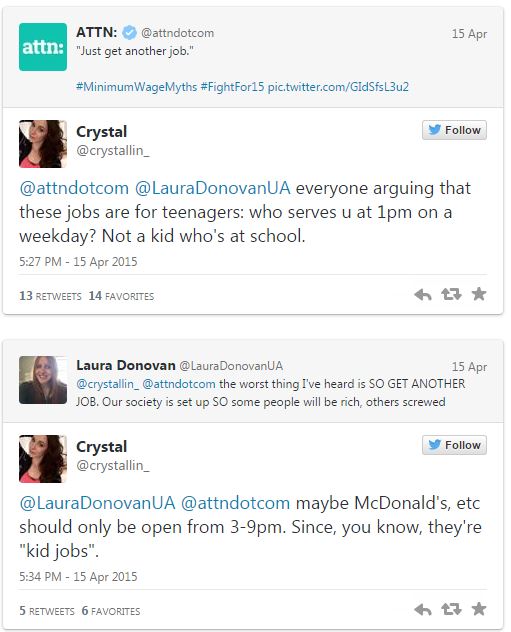 Although McDonald's recently announced an increase in the company's average wage from $9 to $9.90 per hour, it only affects its workers at company-operated stores not at franchises.