Metro Justice members and volunteers have been rolling through November with passion and focus. Read on to learn more about Rochester for Energy Democracy, local efforts to win Single Payer health care, Rochester immigrant solidarity work, the upcoming Alternative Fair, and check out Member's Corner with Christine Noble!

R.E.D. is a campaign started by Metro Justice to halt the pending climate catastrophe and ensure environmental justice in the long-term. We are striving to build an energy system in which communities -- not corporate investors -- decide what energy we use, where we get it, what we pay, and how that money can be used to benefit our community. The first steps towards this vision is organizing our neighborhoods for community-owned solar and replacing RG&E with a public, not-for-profit utility with a community-elected board.

The R.E.D. committee meets biweekly on Wednesdays from 5:30 - 7:30 PM. At our most recent meeting we discussed how our local public utility campaign should intersect with other organizations doing the same work. As a member of the Energy Democracy Alliance, we're committed to a state wide strategy for public power (pun intended). We reviewed ongoing research on effective models for community-owned solar and case studies of public utilities across the country. Most importantly, R.E.D. engaged in its first outreach phone-bank to recruit Metro Justice's existing contacts in the Plymouth-Exchange neighborhood! For five of our volunteers, this was their first-ever phone-bank, and we're excited to continue building their leadership! 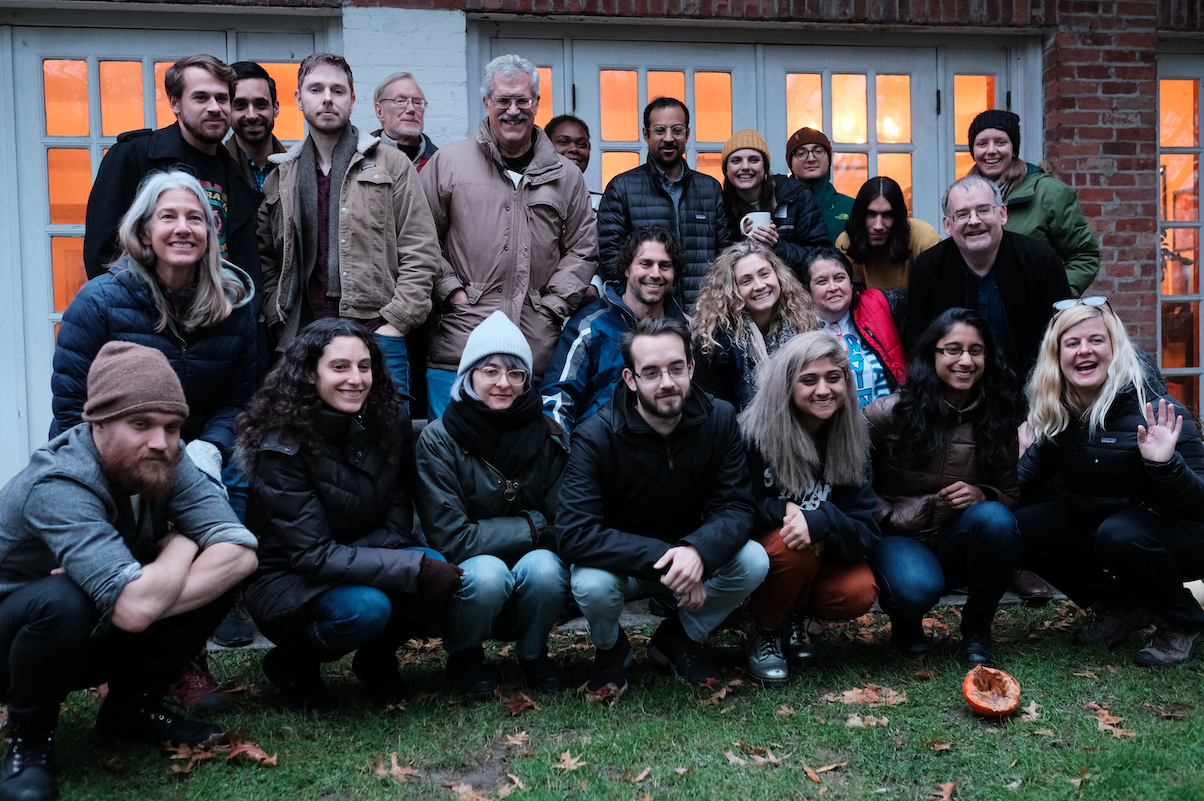 This past August, Metro Justice officially joined the statewide Energy Democracy Alliance! Being a member organization of this alliance allows us to coordinate with, support, and learn from organizations across NYS doing climate and energy justice work that is consistent with our values. This past month, Metro Justice's Lead Organizer, Mohini Sharma, and three Metro Justice members attended the three-day retreat with other members of the Energy Democracy Alliance in Ossining, New York. At the retreat, we discussed goals, tactics, and timelines to further statewide organizing for energy efficiency, transitioning to renewable energy, and establishing public control of utilities and energy. Every aspect of our work centers community control and the disproportionate impact of climate change on poor, working class, and communities of color. One of the most exciting outcomes of this retreat is a partnership with the Democratic Socialists of America to build statewide campaigns for public utilities. We will engage in biweekly campaign calls, and Metro Justice will host a base-buildling and campaign strategy training for statewide partners in January! 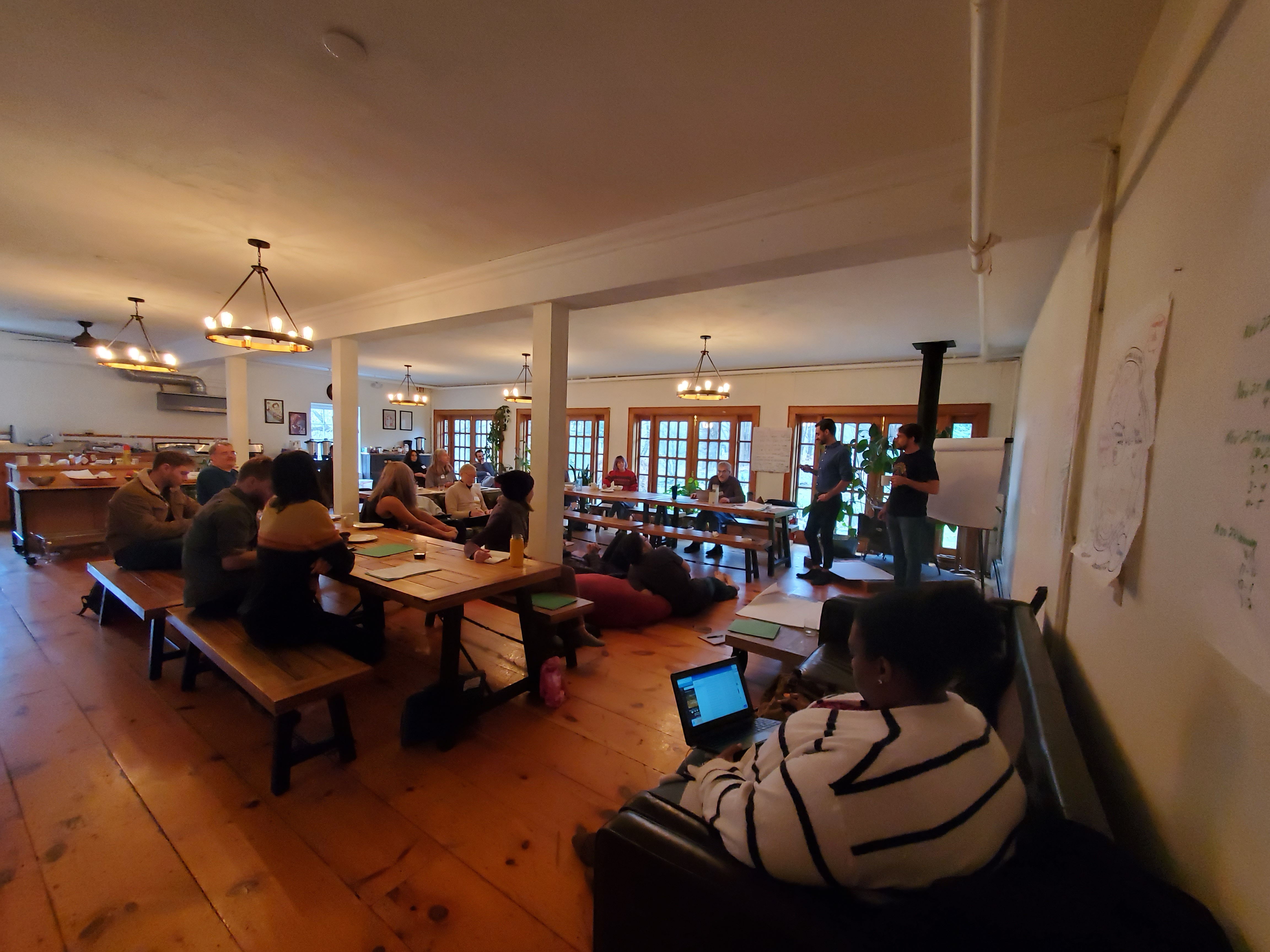 This past month, R.E.D. also had its second canvass outing in the Plymouth-Exchange Neighborhood to build the community power we need in order for this campaign to succeed! We introduced the campaign to PLEX residents, listened to their experiences with meeting their energy needs, and recruited them to the effort. Our efforts yielded 20 new sign-ups to get involved with the campaign! If you want to get involved, you can sign our petition too! 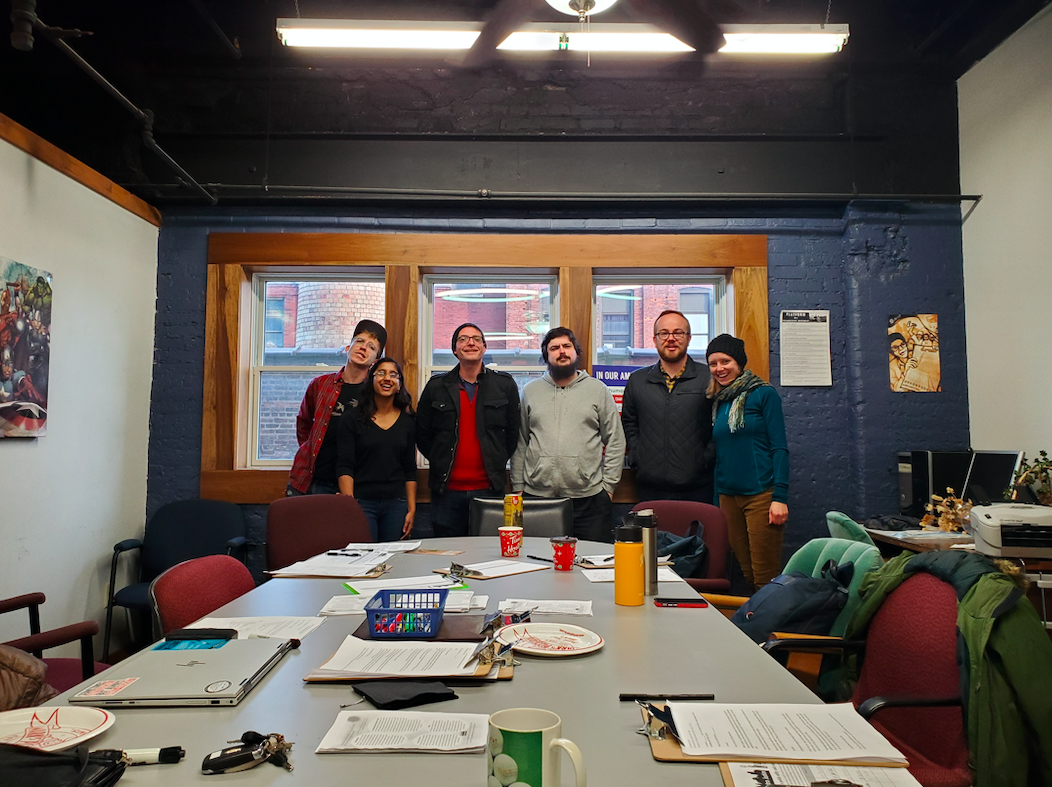 Metro Justice houses the Rochester Chapter of the Campaign for NY Health: a statewide movement for universal healthcare in NYS. This month, Rochester for NY Health hosted a Single-Payer 101 workshop at Small World Books for anyone unfamiliar with the NY Health Act and looking to learn more. The workshop broke down what Medicare-for-All bills really mean for one's health care and answered questions about New York State's own Medicare-for-All bill: the New York Health Act. The workshop was a success and recruited 7 new people to an already robust committee of grassroots activities to make healthcare a human right!

On November 21st, 75 statewide members of the Campaign for NY Health gathered in Albany to protest the annual meeting of the New York Health Plan Association (NYHPA). The NYHPA is a trade association/lobby group that serves our state’s private health insurers, making it one of the biggest obstacles in making health care a human right in NYS. 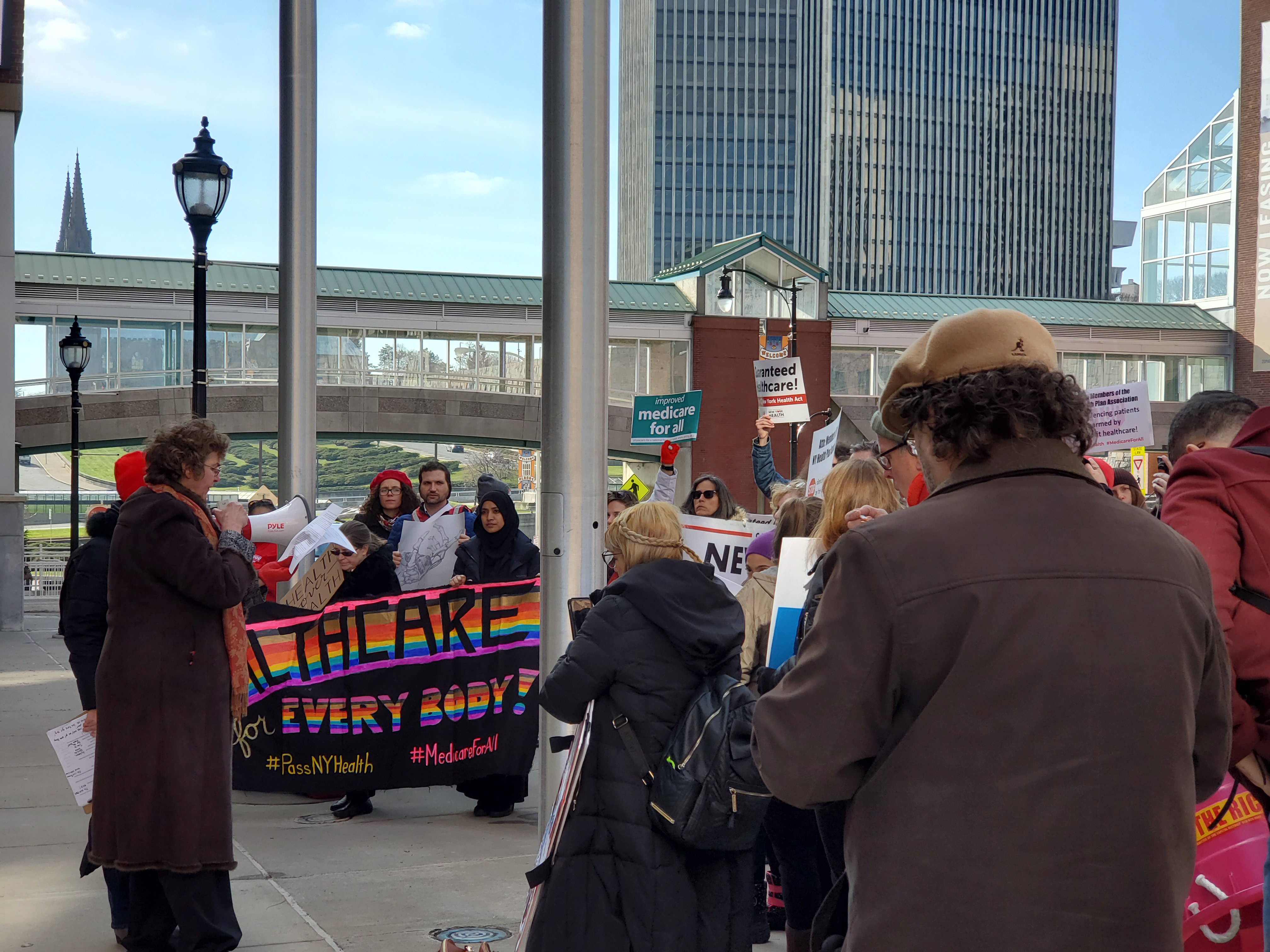 One of our speakers was Stillwater resident Scott Desnoyers, who lost his son, Danny, to the for-profit health insurance system. After missing a premium payment of $20, FidelisCare canceled Danny's plan, which prevented him from being able to afford life-saving anti-depression medication, after which he committed suicide. Other speakers included a representative from 1199 SEIU and a reverend from Long Island, both of whom spoke to racial bias and injustices in the health care system. Our own Lead Organizer, Mohini Sharma, also spoke at the protest to highlight the exhausting obstacles and bureaucratic inadequacies that prevent everyday people from accessing even the most basic health care services.
We delivered the following list of demands --

You can watch video of the entire action here.

Metro Justice remains a dedicated ally of the Rochester Rapid Response Network. RRRN is an ally group formed to support immigrants facing detention or deportation by engaging in community-based strategic actions and public education guided by their directly-affected immigrant families.

We have an exciting new announcement! As of this month Metro Justice Education Fund is now the fiscal sponsor of the Rochester Rapid Response Network! Because Metro Justice seeks a more peaceful, just, and sustainable future for everyone, including immigrants, Metro Justice is dedicated to supporting the work of the RRRN and views this work as critical to our mission.

We look forward to supporting RRRN in strengthening immigration justice movements and support for our immigrant families in Rochester, NY.

I first joined Metro Justice in 2013 as strictly a dues paying member. I had friends with long histories with the organization, but had not heard of it until I met them. Trusting their values and judgment, I signed on. In 2016, during the election I attended more Metro Justice events and learned more about our values and strategy. It was the latter that really convinced me to go that step further, regularly volunteering and eventually serving on Council!

Not many orgs would have an occasionally homeless, trans woman on their board, but no one here even blinked. They, we, believe in empowering those who have been left powerless. We are membership driven and when at our best, constituent led.

Now we have a campaign that I am excited about, Rochester for Energy Democracy! A campaign hat addresses the overlapping oppression of environmental disaster, capitalism, and racism. We have an opportunity to put our energy infrastructure into the hands of the people that use it, radically altering the balance of power in our community. I hope you are all as excited as I am. Metro Justice is ready to change how people view their place in the world, and hopefully by example, help others to do the same.

The Metro Justice Membership & Fundraising Committee has been hard at work for months planning for this year's Alternative Fair! Please be sure to join us on December 6th and 7th at First Unitarian Church of Rochester, 220 South Winton Rd.  Check out our facebook page for previews of this year's vendors and community organizations. 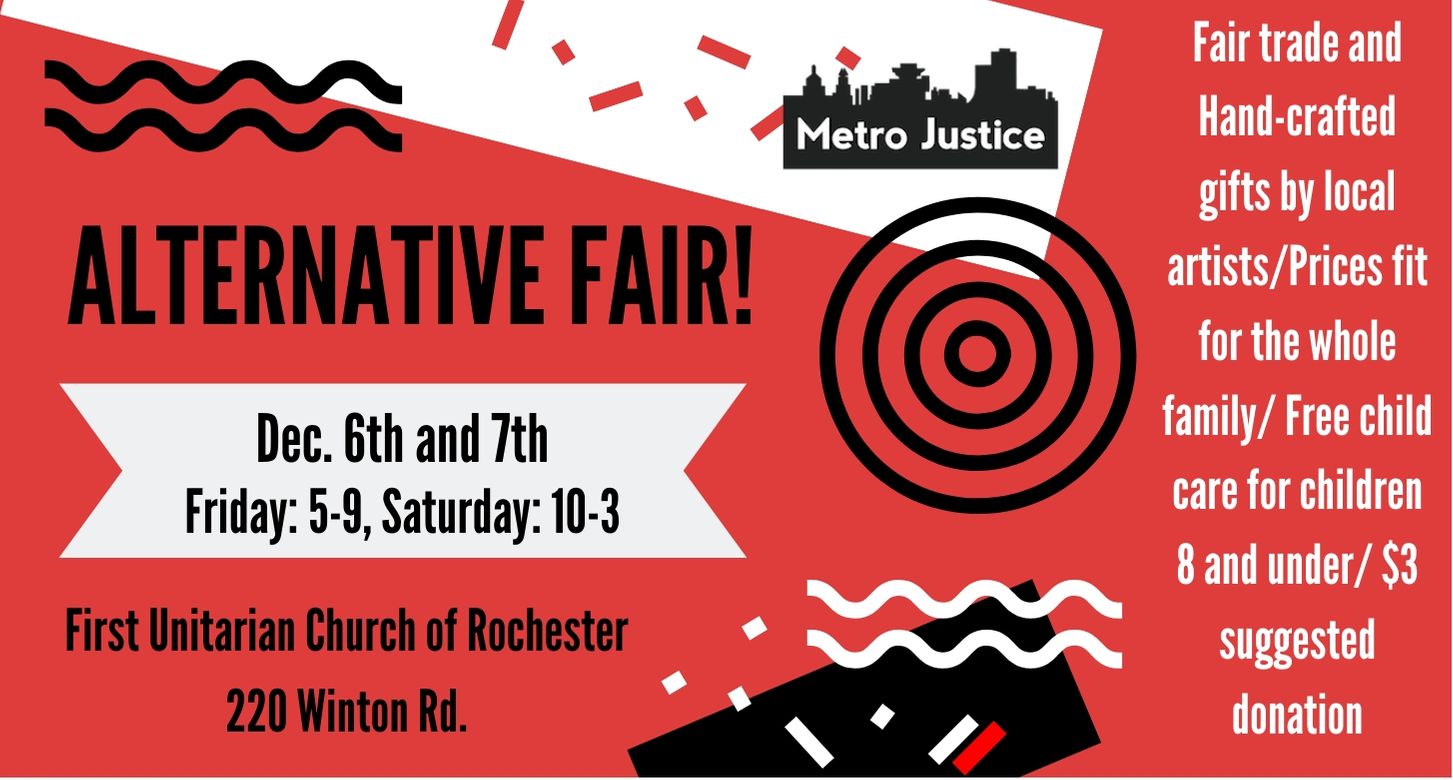